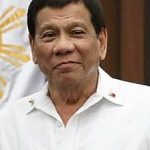 2 Replies to “What happens next after Duterte?”