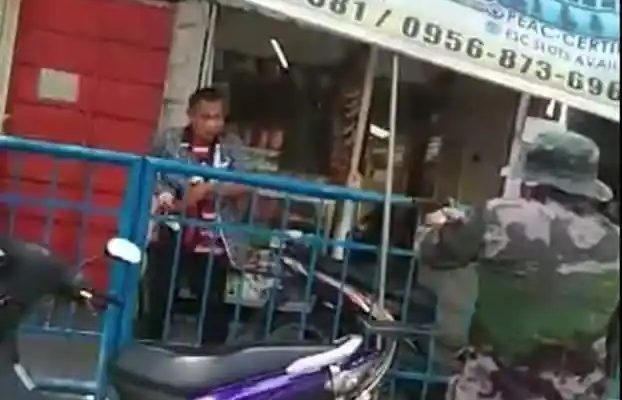 Now before you get your panties in a bunch, I suggest you take a long, deep breath.

Over at the Twitterverse, the “wokes” are once again up in their virtual arms condemning a certain Police Master Sergeant Daniel Florendo for shooting retired Corporal Winston Ragos.

The incident happened at a checkpoint at Barangay Pasong Putik in Quezon City. Ragos was asked by the police officers manning the checkpoint to go home as he was in violation of the Enhanced Community Quarantine. From there, the situation transpired from bad to worse as Ragos did not comply and motioned to draw what was presumably a weapon from his bag, forcing MSgt Florendo to shoot.

While this may be a simple case of self-defense, anti-military bureaucrats, “activists,” and the “wokes” would have one believe that it was not.

Legal-savvy people would point out that the rules of engagement require “unlawful aggression” before loosing one’s firearm. They would argue the jurisprudence (GR No. 128871) that merely moving to draw one’s weapon does not constitute “unlawful aggression.” They would go so far that there was an “abuse in numbers” as there was only one of Ragos and five of the men in uniform.

On the other hand, the usual crop of the mema-contrarians, the so-called “activists” and “wokes,” are once again wreaking havoc with their tililing rampage and usual appeal to emotions which only muddles the issue at hand, if not rendering its discussion pointless. Cries of “dictatorship!” and “Martial Law!” are once again heard over social media resulting from the height of the throes of the “wokes” induced by their boredom and cabin fever.

Like the average schmoe, soldiers are humans. Humans have a “fight or flight” response—a physiological reaction that makes one defend one’s self or run in times of danger. However, unlike the average schmoe, soldiers are honed to have sharp reflexes and quick reaction times. Their rigorous training conditions them to lean more towards a “fight” response during a dangerous situation. This in turn makes them more effective in combat and by extension, more effective in preserving themselves and protecting the people.

This simple fact seems to escape the “best and the brightest minds” of our generation as they indulge themselves in circle jerks wherein the most knowledgeable one gets to come first. It’s both hilarious and disgusting, really.

Now I can only hope I can be forgiven for not joining in the bandwagon of outrage faddists as I actually respect men and women in uniform. As I’ve said in a previous post, during times wherein a society is fighting for survival, the concepts of equality and human rights take a backseat. As such, higher value is placed on the lives of policemen than that of any number of quarantine violators.

On the CCTV footage which depicted the shooting incident, Ragos was evidently being ordered by the men in uniform to stand down. The stand-off lasted for what seemed like hours until Ragos deftly moved as if to draw a weapon from his bag. Florendo was then seen to have frozen for at least three seconds before being forced to fire his gun twice.

Now let’s say for the sake of argument that this is a case of use of excessive force. It could be counter-argued that the first shot was intended to incapacitate Ragos. However, seeing that he was still standing and still seemed to be drawing from his bag, Florendo shot a second round, ensuring his self-preservation and killing Ragos.

Putting aside the arguments of the legal “experts” and the disdainful whining of the “wokes,” it should be factored in that Florendo evidently acted on instinct at that point. And during these moments of self-preservation, all notions of protocol and propriety fly right out of the window.

Sure, we can all weep for a retired military man until COVID-19 bids goodbye. We can all lament on the fact that a man with a mental disorder was killed “defenselessly.” In the grand scheme of things, we all have to remind ourselves that we are engaged in an extraordinary war with a virus that threatens to destroy society itself. It is not wise to make the situation even worse by risking one’s self to the virus and risking passing it on to an innocent bystander.

At the end of the day, Ragos is a casualty—a number, if you will. I do not celebrate such a death as I view it as a waste, but let us not drown ourselves in pissing contests and pointless bickering. The cruel truth remains: the lives of our men and women in uniform, together with our healthcare workers and frontliners, are more valuable than any yahoo who thinks they can violate the rules of quarantine, mental disorder or no. Paint it with moral indignity to your heart’s desire but these people are the ones standing between you and a deadly contagion.