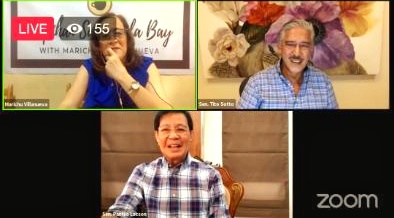 The Lacson-Sotto tandem has revealed some of their plans and programs should they be elected President and Vice-President on May 2022.

In a virtual interview at the Kapihan sa Manila Bay forum, hosted by Philippine Star columnist Marichu Villanueva, Lacson and Sotto bared that what prodded them to run was primarily the pressing problems they country is facing in light of the present pandemic environment.

The two revealed the close friendship they have developed in the Senate, through the years, together with another Senator, Gregorio Honasan, who is also Lacson’s mistah at the Philippine Military Academy. Both are members of the Matatag Class of 1971.

While Sotto is termed out for reelection, Lacson is eligible to run for reelection in 2022. However, Lacson is, who turned 73 last June 1, felt it was time for him to either retire from his political career, or cap it with being elected to the highest office in the land at a time when the country and the rest of the world are in the midst of the worst pandemic in the history of mankind.

Lacson bared that he is the incoming Chairman of Reporma, the political party founded by Gen. Renato De Villa, who also ran for President in the 1998 race. Lacson’s entry into Reporma was finalized over the weekend after meeting with former Speaker Pantaleon Alvarez, who is the incumbent Secretary-General of Reporma, after he left PDP-Laban last year over what he deemed as the improper manner which Sen. Manny Pacquiao was made Acting President, without the assent of other party members.

The NPC-Reporma alliance will also include Aksyon Demokratiko, the party founded by the late Sen. Raul Roco, when he ran for President in 2004. Aksyon’s highest elected official is Sotto’s nephew, Pasig Mayor Vico Sotto.

In addition to Reporma and Aksyon, Lacson and Sotto also met with former Vice-President Jejomar Binay of the United Nationalist Alliance (UNA). Binay will run for the Senate under the now combined NPC-Reporma-Aksyon-UNA slate. This is by far, the largest alliance of parties assembled for the May 2022 election and leaves very little room for other rumored candidates, such as Manila Mayor Isko Moreno and Sen. Manny Pacquiao, to form their own coalitions, given the administration already has the PDP-Laban, Nacionalista, Lakas-CMD and NUP on their side of the political fence.

Lacson and Sotto disclosed that they are now in the process of finalizing their campaign platform with the other alliance partners. Personally, Lacson bared that if he wins the Presidency, he will focus on fiscal reform, primarily the national budget since he is very concerned with the amount of total borrowings against what is actually spent. He would also initiate measures to minimize the level of corruption which he presently estimates to be at a high of 20% of the total annual budget of the government.

The two bared that rather than asking Congress for new tax measures, they would rather focus on more efficient collection and spending of the national budget because the people are reeling from the disruption caused by the pandemic. Lacson pointed out that if he can lower corruption by 10% in his first year in office, that would already be a significant achievement.

Lacson and Sotto would both be 74 years old if they win in 2022, which would make them the oldest President and Vice-President to assume office. The two did not think that this would work to their disadvantage given the bulk of the country’s present population is between the age of 21 – 45 years old. Lacson said that he and Sotto have a combined experience of 80 plus years as public servants. This actually makes them the most qualified since they wouldn’t have to go through a learning curve anymore. They will hit the ground running after assuming office.

It was obvious during the interview that both have an excellent working relationship. When asked about how he would deal with the usual intrigue between the President and Vice-President, Lacson categorically stated that theirs will be a council of two; working closely together in order to achieve the goals they have set for themselves and for the country.

Sotto further elaborated by saying that he intends to help the future President by acting as the conduit to the Legislative and other government departments and agencies in consensus-building, which he deems as an integral part of inclusive leadership. Lacson even joked that he was looking into the possibility of him and Sotto delivering the annual SONA on an alternating basis, if there was no Constitutional prohibition.

Sotto revealed that he had no issue with the President adopting some of the Senatorial candidates he mentioned as part of the NPC slate. He said that he actually welcomes the Presidential endorsement because the Senate would needs veteran Senators to speed up the process of legislation in this kind of environment.

Sotto further elaborated that the election campaign will not keep him from exerting his best efforts to pass what remains of the President’s legislative agenda, which was highlighted during Monday’s SONA. He welcomed the President’s endorsement of his candidacy saying that it is actually a validation of his competence as a public servant.

Lacson, for his part, mentioned that he would ensure the enactment of the Uniformed Military Personnel Pension Bill and his Budget Reform for Village Empowerment (BRAVE) Bill which allots development funds from the provincial down to the barangay level automatically from the national budget.

With BRAVE, Lacson aims to minimize the corruption from the pork barrel and ensure that development funds are properly allocated and accounted for at the LGU level. The LGUs are in for  windfall beginning 2022, with the implementation of the Mandanas ruling by the Supreme Court, increasing the LGUs share of allotments from revenues of the National Government. Lacson foresees the combination of the two measures fueling development from the top to the bottom and finally address the issue of underdevelopment because of the politics involved in the downloading of funds from the national to the local level.

This early, the Kakayahan, Katapangan and Katapatan tandem appears to be the one most capable to challenge the administration’s bets for 2022. The paths of the other personalities who have made known their intent or continue to hide their intent, to run in 2022, are definitely narrowing.

What this proves is popularity alone will not guarantee a win. Fate and destiny also play roles, along with political acumen and experience. Definitely Lacson and Sotto have both over their rivals.