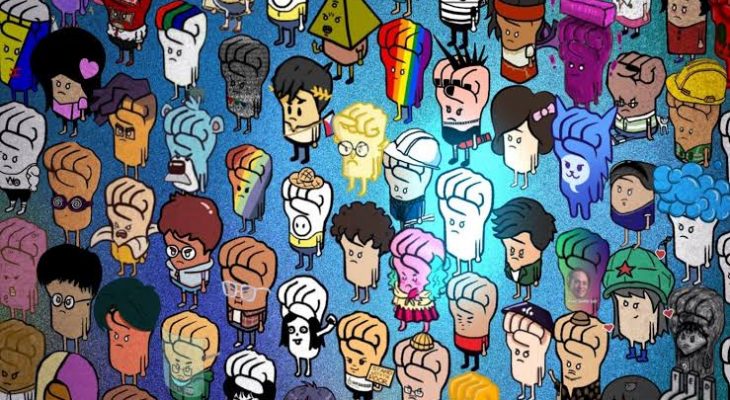 Apparently there’s a new online sensation whetting the appetites of every Pinoy woke while waiting for the next outrage fad for their grandstanding pleasure.

A satirical cartoonist called Tarantadong Kalbo apparently made a simple illustration about clenched fists bowing down to some unseen figure while a solitary one is standing in open defiance. Simply called “Tumindig”, it’s currently circulating around the net being devoured by “netizens” and mainstream media alike.

It’s similar to a popular photograph repeatedly shared in social network sites about a lone German named August Landmesser who did not perform the Nazi salute while everyone around him did. It’s often shared and labelled as a symbol of courage as it was obvious as to what type of crowd the man was with at the time, and the possible consequences of what he did might happen.

And that’s apparently what the cartoonist was trying to channel, which anti-administration entities also amplified across all platforms of communication. Well and good, except that it fails spectacularly as far as messaging is concerned.

First and most obvious is that making a stand against a popular, and democratically-elected leader can hardly be considered a “stand against tyranny” as these “dissenters” want to paint it. A more concrete evidence of that thesis actually happened way back in 2016 when the majority of the voters decided they have had enough of the politics and personalities Trarantadong Kalbo seems to support.

It happened again back in 2019 with the pathetic outcome of the senatorial elections and they all blamed it on “trolls” except their own lack of compelling platforms and having chumps with nothing to show for as candidates.

And second, there’s nothing “courageous” about dissenting against this administration. Every attention-deprived woke this side of the planet had been doing it for years since Duterte was in office and they’re still okay. The most you’ll get for your “dissent” is being heckled or trolled by admin supporters or, well, real trolls.

But the likes of 1Sambayan did say their candidates are hesitant to come out and participate because they’re afraid of being trolled, so that might lend some credence to Kalbo’s nebulous interpretation of courage.

And the most amusing aspect of this little cartoon is how, for the nth time, the opposition belittles those who do not toe their narrative as buffoons lost in blind idolatry instead of convincing them to see things their way by presenting better alternatives and quantifiable and compelling plans to chart the country’s future.

The opposition is already on thin ice as far as public support is concerned. They’re already reviled as it is, and insulting potential voters is definitely the way to go to achieve victory.