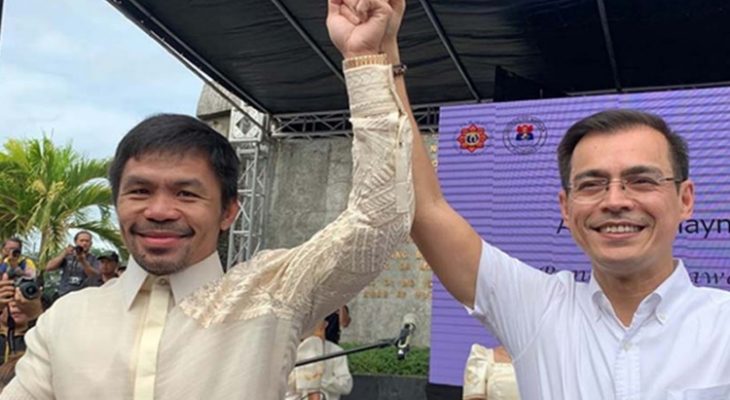 Just when you think politicians have recalibrated their strategies and game plans to their respective campaigns in light of the coming 2022 elections, along comes Isko Moreno utilizing another obsolete tool practically worn out by the yellowtards and their red mercenaries: Mudslinging.

A few weeks ago Sen. Manny Pacquiao went down the same hallowed path that “Yorme” seems to be treading these days and ended up looking like a bigger dumbass than he gives himself credit for. Instead of the hoped-for damage to significantly weaken the formidable support to the popular president, Pacquiao’s aimless ululations only managed to focus the spotlight unto him, and not in a pleasant way.

All the pro-administration personalities had a field day skinning the hapless senator, with attacks ranging from the most hilarious memes to nasty insults that all but painted him as an ambitious idiot who can’t even muster enough competence to stage a good attack against a political rival.

More than a few observers have commented that that style was lifted from the yellowtard playbook.

Well yes and no. Yes, because as far as methods go, that’s the only option available to the yellow cabal and nothing more. And no, because every political entity in the planet have used that method since forever, to advance their candidates and their causes. So it’s not like the yellows invented something despite their known abysmal lack of imagination when it comes to various approaches in problem-solving.

And Pacquiao has been singing that same tune like a broken record ever since he announced his plan on becoming the next president. Perhaps in his addled thinking, that popular saying about bad publicity is still publicity can somehow score him points against his rivals. Sure. At least with the likes of Pacquiao, everyone already has that expectation somewhat; in that whatever tomfoolery he commits is non-surprising given his stature and history.

So it comes as a bit of a shock when a media-savvy and relatively intelligent candidate like Isko Moreno also devolved into that blatant TRAPO maneuver many thought he was above from ever using. People had been very supportive of Moreno from the start, when he won his post against Erap Estrada as Manila mayor. He was admired for his efforts in Manila, and in actually educating himself to be a better fit for his role—unlike the scam-riddled degree of Pacquiao—something unheard of among the majority of celebrity-turned politicians content with just their fame to hold them in position.

He even had the praise of high-profile Duterte supporters for his vocal support of the president’s management approach and their mutual admiration for Singapore statesman Lee Kuan Yew. But somewhere along the events leading up to the 2022 elections, Moreno had slowly and steadily distanced himself from any semblance of support for the president, and this slow but inevitable outcome has now bloomed into a full-blown attack against the president’s daughter—the leading candidate in the recent presidential polls.

And this is where the baffling issue about “Yorme” comes in.

Because if Moreno is indeed that serious to run for the highest post in the land (or in any post for that matter), all he has to do is look at the recent outcomes of the last two elections that utilized black propaganda and some hackneyed, rushed “plans” to pass off as “platforms” (probably just for the sake of having platforms), and he can see that smear campaigns during these times have a big tendency to backfire against those who use them. More so if it’s against a massively popular character like Duterte and whoever he endorses. The 2016 presidential elections and 2019 senatorial elections that practically gave birth to the Twitter hashtag “Otso Inidoro” are damning evidences that deserve a more careful approach in the future.

While it’s understandable as a player to attack your perceived enemies just to win, we are no longer in the late 80s and early 90s when political patrons have the mainstream media to control and sway public opinion to either support or destroy someone or a cause. With the help of social media to counteract the monopoly of MSM as well as having witnessed a working government that is in stark contrast to the one it succeeded, people are smarter and demand quantifiable plans and platforms from their candidates these days.

So it’s confounding why Moreno is still using this tack to advance his politics. All he has to do is observe typical yellowtards and their red mercenaries stumble and humiliate themselves from one pathetic thrown issue after another while incurring the ire of potential voters and he can probably come up with a better way to put himself in the spotlight better than some pathetic swipe at Sara Duterte that’ll make Antonio Trillanes proud.

Too bad about “Yorme”. A lot of people thought he’d be better than the pathetic crop of opportunistic vultures like the yellows and reds. Looks like he’s in bed with both. And that dream of a better opposition for the Philippines would have to take a back seat again.