No amount of testing will change the reality that the only way out of the sticky situation the world—or the Philippines for that matter—has found itself to be stuck in is through a cure or a vaccine.

So it’s confounding that a large sector of society’s wokes have been caterwauling to kingdom come about “mass testing” for a while now, all but ignoring sane, credible assessments like that of Dr. Edsel Silvana, whose detailed explanation of the realities of testing and limitations of its application practically made the demands of these meme-sharing lunatics make a two year-old’s tantrum sound mature (full post here):

What is mass testing, and is it feasible?

It really depends on how you define it.

If you define mass testing as population-based testing, meaning testing everyone regardless of symptoms and exposure in order to pick out those infected, then it is NOT feasible and NOT useful.

a. There is no point in testing someone who is not exposed and has no risk. It is just a waste of money and may come back as a false positive.

b. Even if you test everyone and they are negative, it doesn’t mean they will no longer be exposed to the virus the next day and become a carrier and a case afterwards.

c. Even RT-PCR will fail to detect virus within the first three days of the incubation period and you will miss a lot of asymptomatic (someone without symptoms) carriers.

d. Antibody testing for asymptomatic carriers is EVEN WORSE than RT-PCR – they will NOT be positive because asymptomatic carriers haven’t produced enough antibodies to make the test positive. Antibody tests become positive about 7 days after the symptoms show up and are best done after 14 days of symptoms because antibody levels are low until someone is on the way to recovery.

e. Testing everyone to determine the percentage of the population exposed is epidemiologic testing and can be done with a representative sample. It is a waste of money to test more than you need. A proper sample for community-based testing of the ENTIRE Philippines has been calculated to be as small 4,000 to 5,000 people. This is a far cry from doing 109,000,000 tests which is not necessary or advisable.

If by mass testing we mean testing everyone who is at risk, then the government is ALREADY TRYING TO DO IT AND IS PAYING FOR IT. This is called enhanced targeted (massive) testing.

The government has reiterated numerous times that it is already supervising the said method of testing given the available resources and manpower at its disposal. 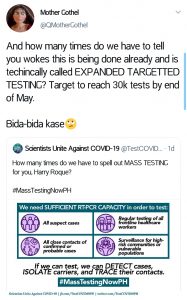 But for some reason the usual noisy shills prefer to drown out the rebuttals to their ululations by nitpicking on semantics and carrying on with a demand that has no satisfactory justification or practical usefulness on its defense.